Just like cucumber luges,* mason jars and ironic mustaches, food carts seem to be all the rage these days. My earliest memory of the concept of mobile food goes back to the late ’80s when my best friend Meagan and I would frequent the Hawaiian Ice truck that would park somewhere along Monroe Street. On hot summer days we would go in search of the truck (most likely after a fierce T-ball game) and, after agonizing between endless flavor options, purchase a cup of the brain-freeze inducing ice and proceed to suck out all of the artificial flavor and coloring. Ah, summer…

My tastes eventually matured, and as a student at the UW, in an effort to ward off college-induced scurvy, I would occasionally purchase a piece of fruit from the wooden stand parked in Library Mall. Fast forward to the last few years and my sister’s discovery of the most delicious gazpacho from the Santa Fe Trailer, usually available on the summer festival circuit. It’s so good, it should be added to this list.

All of this brings me to a gorgeous Friday evening in May spent in Olin Park with my other best friend, Ryan (there you go, Ryan, it’s in writing for the world to see) and 498 other Madisonians eager to check out the city’s inaugural food cart festival, Isthmus a la Carts. We arrived at Olin Park around 6, just as the sun was beginning to hang lower in the sky, giving the tall grasses that happy hour glow, and made a beeline for Banzo (well, first beer, then Banzo). I was eager to try the falafel and hummus that I had been hearing so much about through the Madison grapevine. 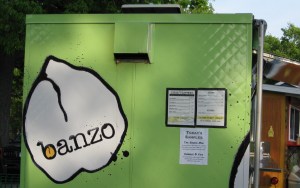 And it was worth the hype. The crispy, warm falafel was brown on the outside, green on the inside and perfect with the tahini sauce and optional hot sauce (I opted, and you should too.) The hummus sampler was tasty as well. I am excited for summer when I can make the trek to the cart for a full-size falafel extravaganza.

After eating falafel, drinking beer and catching up from our perch on the hill, Ryan and I mozied next to Caracas Empanadas for homemade empanadas.

Meat eaters were out of luck, but I was not. 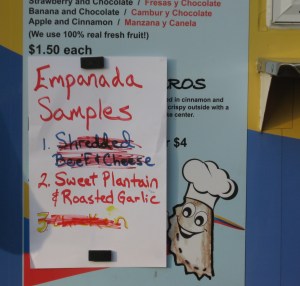 The sweet plantain and roasted garlic empanadas, with a shot of cilantro sauce on the side, were where it was at. The crust melted in my mouth, melding sweet flavors of plantain and garlic, enlivened by the refreshing cilantro. Oh yeah.

From there, things get a little hazy. There were samples of veggie burgers and tofu with rice, Ryan had sausages, I had more beer. For dessert, Ryan sampled deep fried oreos, but with no Hawaiian Ice truck in sight, I made my way back down the hill to Banzo for my nightcap.

*Don’t be the last to know about cucumber luges… post coming soon.

First and foremost, happy May.

Second of all, happy birthday to me. 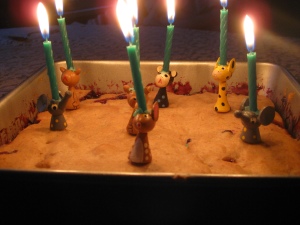 It’s late and I don’t have too much to write here, but I wanted to spend the midnight hour doing it anyway. Tonight I feel lucky for blueberry cake made by my mom and vintage candle holders out of a well-worn box from Iowa, happy hour banjo lessons, and glass jar lanterns lit outside for the first time as a surprise. A bright yellow orange kitchen where I get to watch Dan make a pizza, listen to Uecker on the red radio and feed spinach to my cats. I feel grateful to have a small garden with tomato plants, blooming irises and the possibility of bee balm.

May your year be filled with dear family and friends, good music, nourishing food and the possibility of bee balm.

Despite what his face says, Don Henley loves the snow ❄️❄️❄️
The Green Owl has a new owner... chili “cheese” fries might be in your future. Up on @madisonmagazine’s website now 🦉🦉🦉 @greenowlcafe #greenowlcafe #meatlessmadison
Results of the 2019 midnight Scrabble throw-down
Several hundreds of dollars and tears later, I have a website! It’s a work in progress... let me know what you think (unless you don’t like it, and then maybe wait a month or so to tell me 😂) Check it out at ericakrug.com
What makes the Nashville hot chicken sandwich at Adamah special? It’s vegan! The latest #meatlessmadison post is up on the @madisonmagazine website now. #vegan #adamahneighborhoodtable
Trying to work from home but Don Henley won’t give up my notes.
Thanksgiving 2019 highlights: squash pie from Madison Sourdough Co., road sledding, the sleeping cabin decked out in lights ✨ #wisconsinfunnextexit #madisonsourdough
What do vegan chefs in Madison make for Thanksgiving? It’s the latest #meatlessmadison post up on @madisonmagazine’s website today 🌱🌱🌱 Featuring James (pictured) of @justveggiez, Lauren of @suryacafe and Cara of @greenowlcafe #meatfreethanksgiving #madisonmagazine
Article about @kosaretreat — Madison’s first Ayurvedic spa— up on @madisonmagazine’s website today... (p.s. they have a sauna) #kosaretreat #madisonmagazine #garverfeedmill
Half-moon’s first official food review 🍦 @nocoastcreamery #nocoastcreamery #icecreamdelivery
Rite of passage.
❄️🎃🙈