I love stories about food, but you probably know that by now. There’s a recipe at the end of this post, but if you’ve got a second, here is a story about fennel: Last December my sister and I went to a winter solstice fire and ran into our longtime family friend, Gillian. While we huddled near the low light of the dying bonfire, Gillian told us about the summer solstice party that she used to throw in June, complete with a bottle of Aquavit frozen in a block of ice with floating flowers. In the darkness, we dreamed of fresh dill, rye crackers, vinegary cucumbers, gravlax, and a long, drunken dusk under the willow tree of Gillian’s backyard. We hadn’t been at these parties, but we could picture ourselves there.

Several snow-less, gray months later, my friends and I started to make plans for a July weekend getaway to the Driftless area of Wisconsin. When we started to talk about menus, I thought back to Gillian’s summer solstice party spread. So for our Friday evening meal, my friend Morgan brought smoked salmon, crackers and cheese, and I decided to make a fennel salad. Gillian hadn’t mentioned fennel, but I could see the green, wispy-fronded vegetable fitting right into the mix. I had read about a salad with fennel and olives in Bon Appetit and wanted to recreate for our mid-summer meal. 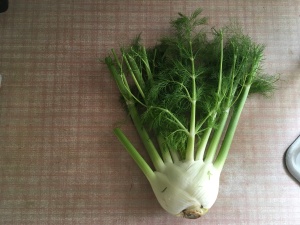 And now for a brief interlude- here is something that you need to know about my sister and me: while we love to think about, prepare and eat food, we are the world’s slowest cooks (just ask our mom.) Once when my sister was visiting my roommates and me in Wyoming, she decided to make us beef stroganoff for a Sunday meal. After an afternoon trip to the grocery store, I believe dinner was served just after midnight… But it was some of the best beef stroganoff you could ever have, as this was back in my meat-eating days.

Back to the old farmhouse in the middle of July and the fennel salad that I began preparing around 6 p.m. Several hours later, as more friends had arrived, I was still grating orange peel, chopping fennel fronds, sipping on gin and tonics, listening, talking, crushing an olive, laughing, slicing a fennel stem, and looking again at the recipe I had scribbled down in my notebook to loosely follow. When the salad was ready around 10 p.m., it was a hit.

Next in July came a vacation to a cabin on the Gunflint Trail in Minnesota (it was a good month.) Reunited at last, my sister and I decided to recreate Gillian’s menu for one of our nights at the cabin for a belated summer solstice party. 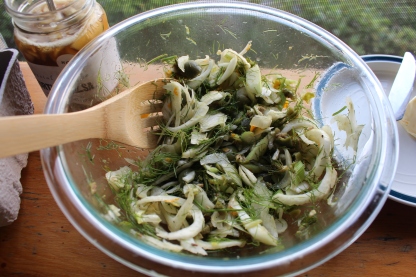 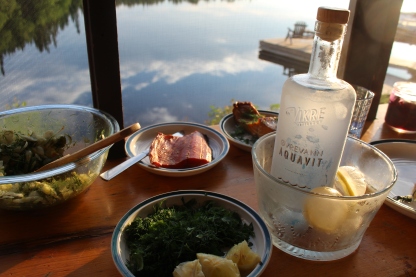 Again I decided to make the fennel salad to accompany smoked salmon from Grand Marais, boiled potatoes with dill, pickled beets, marinated cucumbers, and a bottle of Aquavit. I picked up the pace a bit this time as there was a hungry family to feed.

Slice fennel stems crosswise (not too thin) and place in a medium bowl. Coarsely chop fennel fronds (you want about ⅓ cup) and add to bowl. Crush olives with a flat-bottomed cup or side of a chef’s knife and remove pit. Coarsely chop olives. Add olives, oil, vinegar, orange zest, and red pepper to bowl; season with kosher salt and black pepper, then toss to coat.

I realize it is now October, but we often get a brief period in southern Wisconsin in the fall when fennel is being harvested on our farms again, so live it up! Get yourself some fennel and carve out a few hours to slowly make this salad for some people with whom it’s fun to take your time. Cheers.