Happy New Year, everyone. I spent my first night of 2011 sleeping in Dan’s new van which I am hoping is a good omen that I will be spending lots of time on the road this year. I definitely can be a homebody, but I was bitten by wanderlust the first time my parents strapped me into the ’77 pinto. And my mind keeps wandering to places like Montana, Wyoming, Washington, the redwoods of California, Maine…

The last two and a half weeks have been filled with many high and some low points. I have decided to focus on the highlights… My January page of my new Snoopy calendar declares that “Love is close dancing,” so I’ll start there-

Highlight #1: Dancing with Dan to Steve Winwood’s “The Finer Things” in his parked van shorty after midnight after his New Year’s Eve show. I had almost forgotten how much I love that song until Dan found the cassette tape when cleaning out his beloved old Chevy Astro.

#2: Dan’s New Year’s Eve show off the interstate in Oconomowoc. Due to the fifty-degree weather and rain, the ski hill was abandoned but the music was rocking! 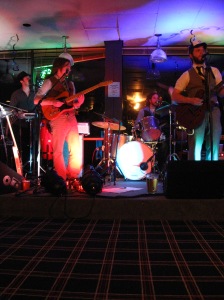 #3: Two trips to Lambeau Field (both ending in victories for the Packers)…

The New York Giants game was crazy fun (including befriending a man from Wales who was seated in front of us and had no idea about how the game of football worked but was pumping his fist and high-fiving us by the end of the game) and the Bears game was really, really tense (at one point I had to lecture a Packer fan- who was from Illinois- about how we do not ever boo the Packers at half-time) but I always love going to Lambeau.

More highlights, including high-stakes Scrabble games and a recipe for whole wheat pasta with zucchini and goat cheese, to come….

4 thoughts on “Love is close dancing”