I was prepared to do a snow dance.

It worked in 1991 when my best friend, Meagan, and I took a break from listening to our Vanilla Ice cassette tape to run outside and chant to the snow gods. Back then we had to wait it out until the morning to find out if school was cancelled… Watching the banner across the bottom of the television we scoffed at the A’s (when does Adams-Friendship ever have school), waited painfully through the B’s, C’s and D’s and felt a rush of adrenaline as they approached the M’s. Usually we were disappointed as Madison was skipped over and we quickly found out that kids in Mineral Point, Monona and Monroe (yay Berghoff) got to stay home for the day. But in ’91 our snow dance did the trick and we had two whole days off of school to play Scattergories at Meagan’s house. 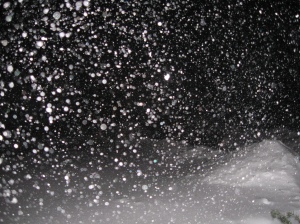 This time around a snow dance wasn’t necessary. These days they take all the fun out of it and announce snow days the evening before- in fact, as I was leaving school at 4:30 p.m. on Tuesday I was informed over the loudspeaker that schools would be closed on Wednesday. It was a little snowy and windy as I drove home from school, but when I drove home from the gym around 7 p.m. we were in the midst of a full-blown blizzard. Luckily Dan had obtained provisions at Star Liquor and Willy Street Co-op and we were prepared for a snowed-in pizza party.

While we waited for the pizza to bake we played a game of cribbage, enjoyed an Ale Asylum Ambergeddon and listened to the wind howl. When the pizza was ready we served it up with some roasted broccoli (toss broccoli and olive oil on a baking sheet and roast in a 375 degree-oven for about 10-12 minutes, sprinkle with sea salt and freshly ground pepper and squeeze on some fresh lemon juice)… Yum. Dessert was a cup of tea and  three chocolate cookies (recipe coming soon).

After a breakfast the next morning of transcendent eggs and french press coffee, I was ready to face what the blizzard had to show for itself. The first challenge was getting out the front door. While it may not have had the same mystique as snow days past,  it was a snow day nonetheless. An occasion to be celebrated; a day to remember. Happy Snow Day. 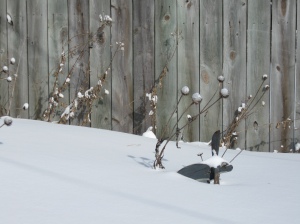