Back in December when the skies were thundering with snow and the Packers still had a chance at a championship, I fell into an abyss of stout beer. It all started with the Narwhal from Sierra Nevada. 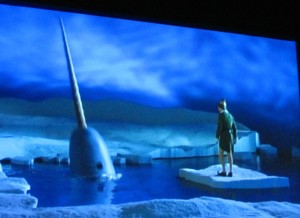 Dan brought home a four pack of this turbidly decadent beer to celebrate the recording of his latest album, Small Batch (to be released in April!), and there was no looking back.

Next came Breakfast Beer, an oatmeal stout from the folks at One Barrel Brewing Company. And then the nostalgically 80s-named Care Bear Stout. Goblets of this dark, sweet beer have me visiting this bar most Saturdays (and some Thursdays). I love these guys- not only is their beer delicious and brewed locally, they donate money to the Humane Society and declare “Go Pack” on their chalkboard the day of the Super Bowl even though Green Bay lost in the second round of the playoffs.

Stouts swirled around me into January and February. There was Luna Coffee Stout from Hinterland served with a post-skiing brunch, Colorado’s Left Hand Milk Stout, Lake Louie’s Mr. Mephisto’s Imperial Stout and last weekend in Milwaukee, after a trip to the art museum to visit a photography exhibit- where I found out no cameras were allowed- I discovered Central Waters’ Peruvian Morning Imperial Stout at Sugar Maple in the Bayview neighborhood. Holy hell. That is one beer.*

And somewhere in that stout blizzard I found this recipe for boozy stout brownies. The original recipe is vegan but I de-veganized it (mainly because two of my favorite people in the world- my mom and Dan- threatened to stop cooking for me and break up with me, respectively, if I went vegan and I didn’t want to give either of them the wrong idea.) I also doubled the amount of stout. I kind of thought the brownies would taste a little more like beer, but they were deliciously chocolatey and gooey. And who doesn’t love baking with beer?

De-veganized from Vegetarian Ventures by way of Chickpea Magazine

Preheat oven to 325 degrees and line a 8×8 pan with parchment paper.

In a large mixing bowl, combine the flour, salt, and cocoa powder. In another bowl, combine the brown sugar, oil, yogurt, and beer. Make a well in the center of the dried ingredients and add in the wet ingredients. Fold dry into wet until a thick batter has formed. Lastly, fold in the chocolate chips.

Pour mixture into prepared pan and cook for 30 minutes or until the center has set.

It’s up to you if guzzle a goblet of stout on the side. I chose a jar of milk. (Cow milk, mom, not that crazy hemp milk. No way.)

*If I attempt to write about beer again, I promise to read some beer reviews- I have no idea how one reviews beer.

2 thoughts on “Stout: It’s not just for brunch anymore”

Please follow along @young_writers_camp to see daily writing prompts! Today’s prompt is inspired by all of the rainbows we see popping up in our neighborhood. Choose a color of the rainbow and make a list of everything that color makes you think of. Here is half-moon’s. Green: t-Rex, trees, leaves, bushes, sometimes houses are painted green, roof of house game, Liz the lizard... Turn this list into a poem (share it and hashtag it #madisonyoungwriterscamp) 🌈🌈🌈
Good morning! Each day I’ll be posting two writing prompts— one in the morning and one in the afternoon— on our writing camp’s instagram page. Please follow along! And write along! ✨✨✨ @young_writers_camp Writing prompt #1: This morning‘s prompt is inspired by Kenneth Koch’s book, Wishes, Lies and Dreams. It’s simple and one of my all-time favorites. Write a poem— it can be 5 lines or 55 lines— where every line starts with the words “I wish...” Don’t censor yourself, just grab a pencil and GO! Take a photo of your poem and hashtag it: #madisonyoungwriterscamp ✨✨✨✨✨✨✨
I feel ya, Don Henley
In a little bit of personal happy news— although now bittersweet— I’m a finalist for best sports story for my story for @isthmusmadison about the @theshredshedwi for the 2019 Milwaukee Press Awards. #isthmusmadison #shredshedwi
Geography work 🌎🦉🦜
Half-moon’s response to social distancing, day two
Writing practice. How many words can you find? 😉
Despite what his face says, Don Henley loves the snow ❄️❄️❄️
The Green Owl has a new owner... chili “cheese” fries might be in your future. Up on @madisonmagazine’s website now 🦉🦉🦉 @greenowlcafe #greenowlcafe #meatlessmadison
Results of the 2019 midnight Scrabble throw-down
Several hundreds of dollars and tears later, I have a website! It’s a work in progress... let me know what you think (unless you don’t like it, and then maybe wait a month or so to tell me 😂) Check it out at ericakrug.com
What makes the Nashville hot chicken sandwich at Adamah special? It’s vegan! The latest #meatlessmadison post is up on the @madisonmagazine website now. #vegan #adamahneighborhoodtable