Our friends, Mary and Jeffrey, of cucumber luge fame, got married this past weekend in Soldiers Grove, Wisconsin. 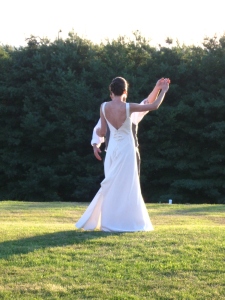 And I, trying to rival what Mary and Jeffrey pulled off in that magical valley, I made pickled green beans for my picnic the evening before (more on those in a moment). But it was a seriously beautiful wedding. 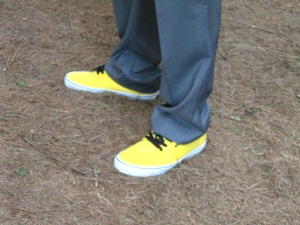 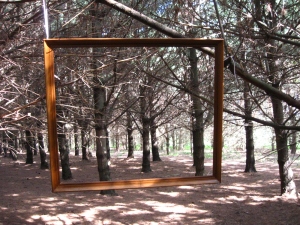 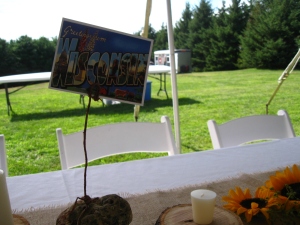 There was a pre-ceremony cocktail hour in the woods where a square wooden frame hung from a pine tree, beckoning smiling faces. There were guests sitting on hay bales and horse blankets watching Mary and Jeffrey plant a tree in soil dug up from their respective home- and adopted- towns. And there was a groom in yellow sneakers, not to mention a bride in a stunning pine needle forest floor-length gown. I even got to fulfill a dream- singing a Townes Van Zandt duet with Dan at the reception (I’ll tell you what- singing in the shower is a whole different ballgame than hearing your voice amplified throughout a valley). In the background the shade crept up the hill as people played badminton and croquet, caught up with old friends and sipped on gin and ginger beer cocktails. When darkness took over there were speeches and bottles of prosecco. The speeches are usually one of my favorite things about a wedding, and this one was no exception. A hush fell over the crowd and tears sprang to eyes as a man named Nils with skinny yellow shoelaces went from describing a scene in which Mary stopped traffic on a Colorado highway as Jeffrey’s truck with 560,000 miles took its last breath, to poetically stating how every relationship needs a doer and dreamer. It was so moving, I almost pocketed the copy of the speech that he left folded on the corner of the head table (maybe there is a less sneaky way to have it? Mary and Jeffrey- could you hook it up?) And then there was dancing. And tiny polaroid photos to be taped into a makeshift guestbook on yellow legal pad paper. 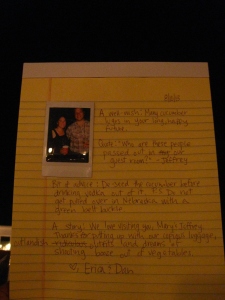 And more dancing followed by the late-night discovery of the bottled beer stash when the tapper ran dry. As I led Dan by the hand back through the pitch black pine forest without a flashlight (I was a camp counselor, afterall) we emerged under shooting star-filled skies, back at the camper near the cornfields we got to call home for the weekend. A successful day, to say the least. Cheers to you, Mary and Jeffrey- thank you and your families for a lovely weekend.

And now, finally about those pickled beans. I decided to pack a picnic for our dinner when we arrived in Soldiers Grove on Friday evening. I prepared a panzanella salad with sungold cherry tomatoes from my garden (I kept the olive oil and balsamic vinegar in a separate jar until we ate and didn’t add the bread until later, either) and decided to ‘quickly’ pickle the green beans I had just purchased. Along with a loaf of country bread from Madison Sourdough Company (three-quarters of which we ripped up into bite-sized pieces to add to the panzanella salad), a circle of goat brie, salty olives, 1/2 a bottle of chilled rose wine, and a brief appearance by an orange crescent moon, it was quite the picnic.

In a large saucepan, blanch the green beans for 3 minutes in gently boiling water, just until tender but still with a snap. Place the green beans in an ice water bath to stop them from cooking further. Transfer beans to a clean (washed in hot, soapy water) jar.

In a medium saucepan, bring the water, vinegar, sugar, garlic, dill, red chile flakes, and salt to a boil. Reduce the heat and simmer for 2 minutes.

Pour the pickling liquid over the beans and cool, uncovered, in the jar (I added the chopped jalapeno- leftover from my lunch- at this point). After about an hour, they should be ready to be sealed up and hit the fridge.

Chill, covered, for at least 24 hours for the flavors to fully develop.*

*We enjoyed the beans later that evening, although they continue to taste better each day.

2 thoughts on “Pickles and polaroids”