Towards the beginning of June, I gave birth to a son. We’ll call him “Half-moon.” That is what I not-so-secretly wanted to name him. It came to me in the middle of a sleepless night- in addition to becoming my favorite yoga pose during pregnancy, I thought it would set him up for a career as a left-handed pitcher.

Parenthood is a trip; my kid’s faces and noises are pretty much the most damn charming thing on earth. The cats couldn’t be more excited. 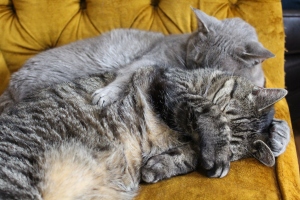 I’ve gotten pretty good at doing things one-handed. Motherhood has also drastically altered my definition of a “productive” day. Now I get excited if I make a smoothie! Before noon! But today I really have something to brag about- as I type over the head of Half-moon, there is a raspberry crisp bubbling away in the oven. I was inspired by a recipe for a peach crisp in the July issue of Bon Appetit and the fact that there was a bowl of raspberries- picked over the weekend by Dan- sitting on the counter. I also added strawberries and cherries for good measure. 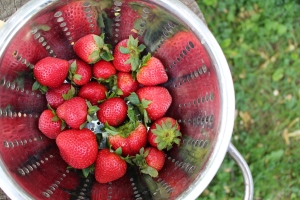 I love crisps because there is a decent chance you have all of the ingredients if you decide to make one on a whim, and they are so impossibly easy- you could probably even do it one-handed.

Directions:
Whisk flour, brown sugar, and salt in a medium bowl. Rub in butter with your fingers until clumps form and no dry spots remain.
Preheat oven to 350°. Toast walnuts on a rimmed baking sheet, tossing once, until slightly darkened in color, 8–10 minutes. Let cool, then coarsely chop.
Smear bottom and sides of a 10″ cast-iron skillet with butter. Toss walnuts, berries, brown sugar, granulated sugar, lemon juice, and salt in a large bowl to combine. Transfer to skillet and crumble topping, breaking up into large pieces, over filling.
Bake crisp until topping is golden brown and juices are thick and bubbling around the edges, 25–35 minutes.

Eat with vanilla ice cream. Because it’s summer. And you deserve it. 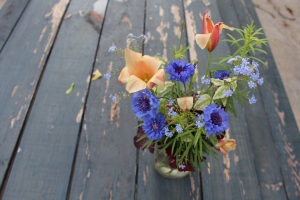 Welcome to the world, Half-moon. May it be always be filled with fresh-picked raspberries and kitties. Cheers.