I never lived on Johnson Street, but my cats did. So did my sister and her cat, Guinness, who is now the unofficial mayor of a neighborhood in Seattle. Long the home of rentals, one-way traffic, a liquor store and a rock shop, Johnson Street is being lit up by new businesses. Forequarter- with its delicious cheese boards- led the way, and now Macha Tea Company, a shop named after the best kind of lunch and a new bar with kegged cocktails are joining the party. Last Friday night Half-moon, my friend Sam, and I went to Jam on Johnson to celebrate this street’s new life. 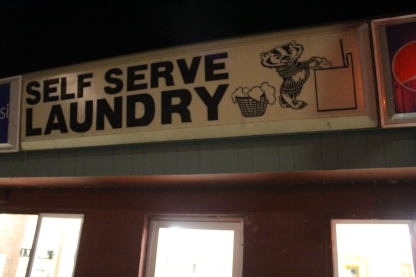 We started at Juneberry Studio and Marketplace, where Sam bought some Wisconsin art and I was charmed by a pink octopus that looks just like my favorite hotmail emoticon.

We crossed the street and headed for Drunk Lunch (sidenote: one of my favorite drunk lunches took place in Seattle and involved my sister and old roomate Brett from when I lived in Wyoming. We ate crab salad sandwiches and drank pomegranate mimosas- the second round’s drinks were considerably larger due to the fact that we weren’t “annoying” our waiter, like his other tables.) While there were no drunks or mimosas to be found at this new style shop, we did glimpse Santa and some sweet taco-related keychains. 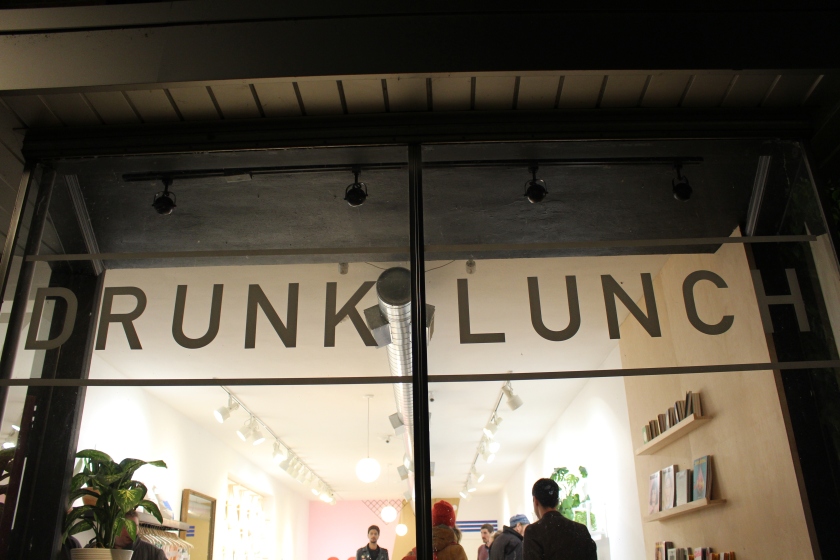 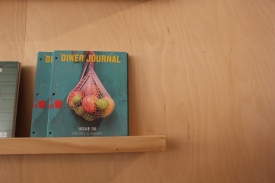 Next up was the Good Style Shop (one of my favorite thrift stores) where we found Chad Vogel (Barmadillo!) and some of his kegged Strawberry Hibiscus soda. Chad’s new bar The Robin Room, will be opening up a couple of doors down from Good Style in December or January.

We were waiting for a table at Salvatore’s, so we headed to the new Macha Tea Company where we chatted with the owner and sampled some teas. 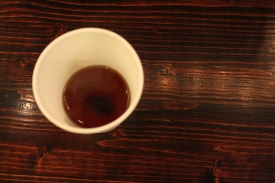 Next we headed for Salvatore’s Tomato Pies where we met up with Dan and sipped on creamy 3 Sheeps Pale Ales (on nitro!) and waited for our table. The pizza I had been thinking about all week came topped with crispy kale and tangy banana peppers. Oh yeah.

One thought on “Jam on johnson”

Now what am I supposed to do.
Please follow along @young_writers_camp to see daily writing prompts! Today’s prompt is inspired by all of the rainbows we see popping up in our neighborhood. Choose a color of the rainbow and make a list of everything that color makes you think of. Here is half-moon’s. Green: t-Rex, trees, leaves, bushes, sometimes houses are painted green, roof of house game, Liz the lizard... Turn this list into a poem (share it and hashtag it #madisonyoungwriterscamp) 🌈🌈🌈
Good morning! Each day I’ll be posting two writing prompts— one in the morning and one in the afternoon— on our writing camp’s instagram page. Please follow along! And write along! ✨✨✨ @young_writers_camp Writing prompt #1: This morning‘s prompt is inspired by Kenneth Koch’s book, Wishes, Lies and Dreams. It’s simple and one of my all-time favorites. Write a poem— it can be 5 lines or 55 lines— where every line starts with the words “I wish...” Don’t censor yourself, just grab a pencil and GO! Take a photo of your poem and hashtag it: #madisonyoungwriterscamp ✨✨✨✨✨✨✨
I feel ya, Don Henley
In a little bit of personal happy news— although now bittersweet— I’m a finalist for best sports story for my story for @isthmusmadison about the @theshredshedwi for the 2019 Milwaukee Press Awards. #isthmusmadison #shredshedwi
Geography work 🌎🦉🦜
Half-moon’s response to social distancing, day two
Writing practice. How many words can you find? 😉
Despite what his face says, Don Henley loves the snow ❄️❄️❄️
The Green Owl has a new owner... chili “cheese” fries might be in your future. Up on @madisonmagazine’s website now 🦉🦉🦉 @greenowlcafe #greenowlcafe #meatlessmadison
Results of the 2019 midnight Scrabble throw-down
Several hundreds of dollars and tears later, I have a website! It’s a work in progress... let me know what you think (unless you don’t like it, and then maybe wait a month or so to tell me 😂) Check it out at ericakrug.com