A couple of months ago, I meant to tell you about cucumbers. I had a simple recipe, a photo, a title. 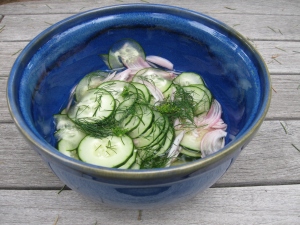 I wanted to tell you about the day in July when I made these cucumbers while visiting our friends in Cheyenne, the last stop on a western road trip that started at a campsite in Wall, South Dakota and took us to the sea and back. 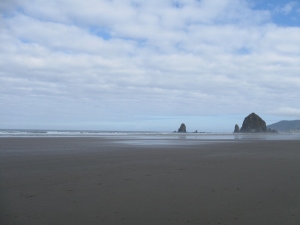 Lingering over familiar coffee mugs, not your mug, but one you know well enough to anticipate the exact weight of it in your hand, we discussed that evening’s dinner menu. With that settled, we jotted lists and designated trips to the store. Free of shopping duties, Meagan and I decided to take a walk to the park with her daughter. We strolled through an area known as the peace garden, a place where quotes are etched into flat stones. One of these quotes caught my eye and I read to myself again and again, memorizing it and trying it out. “The world is full of people looking for spectacular happiness while they snub contentment” this stone told me a man named Doug Larson said.* And never was a stone more adept at reading someone’s mind. We made our way to the herb garden where I picked dill for the cucumbers and Meagan and I talked about our lives. Choices are made about where to live and jobs to have, but there is a nagging voice always questioning. Is this the right thing? Would I be happier if…?

Skies threatening, we walked back home and fixed lunch, opening a cheap bottle of rose wine to mix with fizzy water.

I meant to tell you all of this a couple of months ago and then… And then my job started back up. The one where I get to write poems with nine-year-olds and read books by E.B. White. The one where I have to test the nine-year-olds more than anyone should be tested and feel the weight of the world to get these kids “where they are supposed to be” according to someone else’s standards. Enter the voice… Is this the right thing? Would I be happier if? What if I lived in the mountains? On a farm? What if I wrote for a living? Or worked the land, a speckled cow dog by my side?

To paraphrase Lloyd Dobler, all I know is that I don’t know. But here is what I think: By all means, have dreams, go to lengths for spectacular happiness, don’t fight against yourself and what you know is right, but allow yourself those moments of contentment while you try to figure it all out. Familiar coffee mugs. Cheap wine. Marinated cucumbers. Old friends. As my dad always says, it will all come out in the wash.

To make marinated cucumbers, combine equal parts water, sugar and apple cider vinegar to cover thinly sliced cucumbers and onions. You can also add dill, if you like. Let sit at least a few hours before serving. These will keep in the fridge for a few days.

*When I looked him up, I learned that Doug Larson was a newspaper man from Door County, Wisconsin.