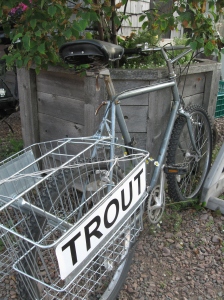 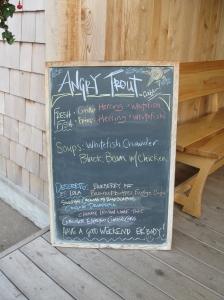 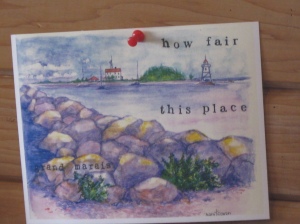 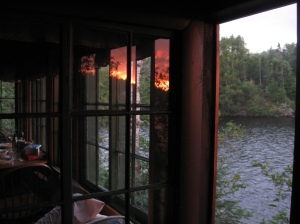 I feel like a bad correspondent and a broken record all rolled into one big ball of suntanned and bug-bitten guilt (‘I promise this time I’ll write!’). I still need to tell you about eating pizza at Delancey in Seattle, riding a police-confiscated, too-big-for-me bike in Jackson, paella in Cheyenne… the list goes on and on. But if I want to live in the present, be in the moment, focus on the here and now, then…

Greetings from the Scandinavian Riviera.

As I type this, I am lucky enough to find myself with my family in the north woods of Minnesota. Even better, I find myself next to a deep, quiet lake and a sauna ten feet from its shores. The last two mornings I have started my day in the best possible way- with a 20-minute swim in the cool water (following a minute of apprehensive shivering in the shallows), a quick and furious dash to the sauna, 10 steamy-minutes of pouring ladles of lake water onto the rocks, a quick dash back to the lake, then a sigh-inducing and body-tingling five-minute swim. Yesterday this was followed by a breakfast of coffee and pancakes with lingonberries. Really, all mornings should start like this.

The last time I was able to start days this way was the last time that I was in northern Minnesota and my name wasn’t Erica, it was Clothilde. I was a camper at Lac du Bois. French camp. I spent five summers at this camp and all week I have been reminiscing about the magical time that I spent in the woods eating bon bons and listening to Salifou, a counselor from the Ivory Coast, tell us stories by the bonfire next to the beach. When I first started attending the camp, there were no showers. After getting awoken at a too-early hour (one summer I was in a cabin where my counselor would bang open the screen door and shout, ‘Bonjour Brussels!’- the name of our cabin- to rise us), we were marched down a path to an area where we bathed in the freezing cold lake, ran screaming up the slippery, steep wooden stairs to the sauna, and then back down to the lake. Breakfast in the lodge followed: Yogurt and mueslix, baguettes with butter and jam, and the best part- hot chocolate that we sipped out of bowls. Heaven.

A lot of what went on at the camp was conducted in French, and although I had studied it a little in school, I spent a lot of time at the camp not sure what was going on around me. It was wonderful. Every afternoon we gathered in a different spot for a new installment of what sounded like ‘plazeer da more,’ which was an on-going improv soap opera presented by the staff. I watched as my underwater basket-weaving instructor, wrapped in a bed sheet, moaned and cried to the tennis pro, Pascal. At the end of the ‘episode,’ I would clap and sing along to the theme song, as best I could, wondering all along what it was that I had just witnessed. Dinner followed. Fat jars of Dijon mustard with cork lids sat at each table and we would mix our own vinagrette every evening for our green salad, served family style. Campfires lit up the night and the singing of ‘Bon swa le loo’ (which, while I certainly can’t spell it, translates to ‘Good night, wolf’) meant bedtime.

While I fumbled and bumbled and spent a lot of time feeling somewhat confused, I learned the important things. I knew the sounds to make to withdraw enough francs out of my bank account to take to the store where I would say, ‘Shoov-oo-dray, ash-a-tay milk chocolate toblerone y coca-cola see-vou-play’ and walk away happily with my afternoon snack. One of my favorite counselors was a guy from France called Willie who would mimic my Wisconsin accent and had nicknamed me ‘Clothesline.’ One afternoon as I sat atop my blue and gray sleeping bag on the top bunk eating my toblerone, I looked out the screen door and saw Willie walking by my cabin. ‘Hey Willie,’ I yelled. ‘Hey, Clothesline,’ Willie responded. Fueled by an extreme sugar high, this exchange made my day and apparently, my long-term memory.

Back to the present. This excursion to the north woods has been marked by an abundance of seafood (including an out-of-this world meal at the Angry Trout in Grand Marais) and a lack of toblerones. The lake/ sauna/ lake routine seems better to me now then it ever did when I was known as Clothilde. Much like a youth may discover drugs, my mom has discovered headlamps. Last night as we lead her around in the woods she was euphoric as she declared that everything was sparkly and that there were bugs everywhere. Tonight we intend to have a campfire by the lake. I only wish that Salifou were here to tell us one of his stories.